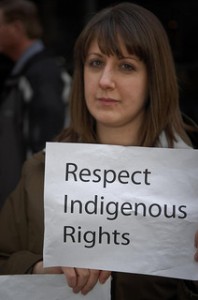 Alberta’s new policy is based on the denial of First Nations’ ongoing interest in and rights to their lands. Image courtesy of [ItzaFineDay] / Flickr.

VANCOUVER, BC, Oct 6, 2013/ Troy Media/ – Despite being roundly criticized by First Nations and Métis organizations, the Alberta provincial government appears committed to implementing its new policy on Aboriginal consultation and accommodation before the end of the year. While intended to streamline consultation through a standardized process and fixed time lines, Alberta’s consultation policy is likely to foster dissent, contempt and delay.

The policy’s shortcomings are serious and numerous. For example, the policy is based on a denial of Aboriginal claims to a right to share in the benefits that flow from the development of Alberta’s lands and resources – the fundamental purpose of the duty to consult and accommodate is to address such claims, not ignore them.

The policy assumes that the province has the jurisdiction to infringe any and all rights protected under s. 35 of the Constitution Act, 1982 and that it rarely, if ever, has to justify an infringement. Both assumptions are questionable. The Supreme Court recently granted leave to appeal inKeewatin where the issue of a province’s jurisdiction to infringe treaty rights under the numbered treaties (which cover all of Alberta) will be raised directly.

Contrary to established legal principles of consultation, Alberta’s policy arbitrarily denies the province’s legal obligation to consult on decisions to grant leases and licenses to minerals. Beginning with the Supreme Court’sHaida decision in 2004, the courts have recognized that such high-level, strategic decisions may attract the duty to consult. More recently, the Yukon Court of Appeal held in Ross River Dena Council that the territory’s open-entry mineral claim legislative regime was unlawful because it denied any opportunity for consultation with First Nations. The Supreme Court refused leave to appeal the decision. Alberta’s policy ignores these legal precedents.

The policy also relies heavily on delegating the Crown’s duty to consult to proponents. While Alberta says it is only delegating procedural aspects of consultation, based on Alberta’s description of the consultation process it is likely that in most cases companies will be responsible for substantive consultation with the new provincial Consultation Office evaluating whether a company has adequately discharged the Crown’s duty to consult. Such a scenario would be at odds with the case law and is likely to frustrate rather than support meaningful consultation.

The policy also falls short of the mark by denying the possibility of First Nation consent ever being required, by incorrectly identifying the criteria for assessing the depth of required consultation, by arbitrarily displacing consultation protocols developed by First Nations and by creating unrealistic timelines for consultation.

Companies and their supporters who have welcomed the new policy as bringing greater ‘certainty’ to the fulfillment of the duty to consult and accommodate are misguided. Alberta’s new policy is based on the denial of First Nations’ ongoing interest in and rights to their lands. The policy also denies many of the core principles of the case law on the duty to consult. As British Columbia’s history exemplifies, a policy of denying Aboriginal rights, title and treaty rights does not foster reconciliation – it breeds uncertainty.