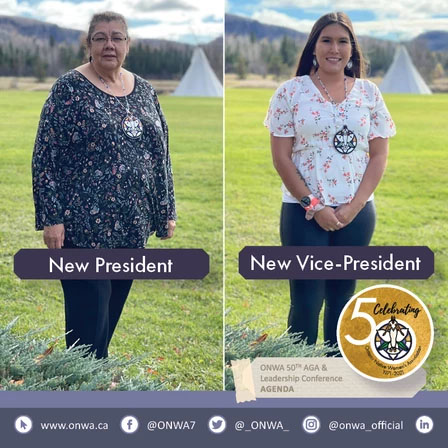 “As ONWA celebrates our 50th anniversary, I am thrilled to welcome these strong Indigenous women leaders into their new roles as President and Vice President of the Ontario Native Women’s Association. ONWA looks forward to their contribution to the ongoing growth and leadership of Indigenous women.” Cora McGuire-Cyrette, Executive Director, ONWA

Debra Vermette, Executive Director of Beendigen, Inc since 2016, is a member of Wahpeton Dakota Nation. In her nomination speech, Debra shared stories about her upbringing, and her personal and professional journeys. Speaking to the delegates, Debra emphasized the importance of Indigenous women’s leadership and that “education is the key to unlocking our future.”

Vermette is as a role model and leader not only at Beendigen, Inc – where she helps Indigenous women and their families escape violence – but also in her Indigenous community at large. Her skills at leading involve an ability to unite like-minded individuals toward their shared goals. Vermette believes leadership is an ongoing journey that takes willingness to watch, listen and learn from others.

“To me, a leader is a visionary – individuals who can see the big picture and bring a team together with the goal of bringing it to life. And I don’t just mean in business. Leaders are in every aspect of our lives; they are our mothers, fathers, family, and friends. They are throughout our communities and the world.” – Debra Vermette, incoming ONWA President

Additionally, a legacy of Indigenous women’s leadership continues as daughter of departing President Dr. Dawn Lavell-Harvard and granddaughter of ONWA co-founder Jeannette Corbiere Lavell, Autumn Cooper, was elected to the role of Vice President. As a student in Indigenous education at Trent University, Cooper is passionate about ensuring Indigenous youth have opportunities to learn and grow within an Indigenous worldview.

In her nomination speech, Cooper shared how growing up around Indigenous women leaders, like her grandmother and mother allowed her to be secure in her identity: “Feeling comfortable in my identity as an Indigenous woman is a result of ONWA.” She also spoke to the importance of youth leadership representation: “It’s important to have youth voices at the table, we need more youth in higher positions. It’s important to have youth voices as our world changes.”

ONWA’s departing President, Dawn Lavell-Harvard, has served in the role for 18 years. As ONWA welcomes its new President and Vice-President, we honour Lavell-Harvard’s many contributions over the years to the organization and Indigenous women in Ontario, across Canada, and around the world.