The 4 Ps of an enlightened approach to oil sands development 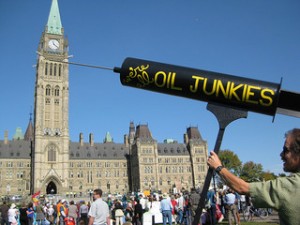 Energy industry trust metrics have fallen in one year from 76 per cent to 29 per cent. Image courtesy of [Peter Blanchard] / Flickr.

EDMONTON, AB, Sep 23, 2013/ Troy Media/ – My friend Robert McGarvey recently wrote a column (Ignore Public Trust At Your Peril) in which he makes the point that without public trust neither business nor governments can survive.

Businesses need public trust for social license to operate. Governments need it to sustain the consent of the public to govern. McGarvey quotes the 2012 Edleman Trust Survey and notes that energy industry trust metrics have fallen in one year from 76 per cent to 29 per cent. He points out the loss of public trust increases uncertainty, risk and costs for business.

“Trust is a two-way street (he writes): an individual, company or government is trusted when there is an alignment of values with the public and the belief that the organization can be relied upon to voluntarily do the ‘right’ thing.” This is the stuff of social license.

There is an emerging sense of the importance of social license in the oil sands industry. The early oil sands business mind set was that if you bought an oil sands land lease the government gave you your social license. That was soon seen as a serious mistake in judgement.

When environmental issues arose around the oil sands industry, the line of thought seemed to be that if your project passed regulatory environmental approval and you met the legal test of accommodation of aboriginal rights, you had achieved your social license to operate. Of course, this is not so. Buying a lease is not the same things as receiving the public permissions that constitute a social license.

The good news is that there is an emerging group of oil sands CEOs who get the importance of public trust to earning and retaining their social license. Their thinking is evolving beyond a purely competitive corporate culture into one that embraces collaboration as well.

That emerging collaborative culture started in the environmental area. The oil sand companies are participating in Canada’s Oil Sands Innovation Alliance (COSIA) and collaborating, under collective ownership, on new technological approaches to solving the environmental challenges – including land, air, water and tailing ponds – they face.

While still at the embryonic stage, work is being done inside the industry towards a new mindset involving the socio-economic impacts of the industry growth on the oil sands region. It is an emerging consciousness and a long way from being fully formed and applied.

The oil sands have evolved in various stages. Oil sands 1.0 was all about big business, big buck, big barrels and big trucks. Oil sand 2.0 started when the industry began to embrace an authentic systems approach to resolving ecological concerns. There is a growing realization now that the environment is not a cost of doing the oil sands business – it is good for the oil sands business.

Oil sands 3.0 is just starting to send out early signals of more change to come. It is forming around the industry acceptance of responsibility for some regional and other socio-economic consequences of oil sands industry development.

Inter-corporate oil sands collaboration frameworks are beginning developed as a way to reduce the tragedy of the commons that happens when individual corporate decisions damage communities when taken in aggregate. This 3.0 stage is going to be harder than the COSIA environment collaboration because collaboration around social values is relative and more complex. Industry will have to learn to deal with competing interests from diverse audiences, stakeholders and some aggressive countervailing forces.

Albertans, as owners of the resource, have a key role to play in encouraging this positive industry evolution towards a comprehensive integrated triple-bottom-line approach to oil sands development. They have to set high and clear expectations on those who are working throughout their oil sands resource development, from leaseholders, to contractors, to regulators and government policy makers. They have to be engaged and insistent with industry as their tenants and with government as their property managers on delivering higher levels of integrity, accountability, honesty, transparency and openness.

They have to act like owners to ensure the oil sands are developed in way that creates genuine Prosperity, enhances stewardship of the Planet and serves the needs of People.

We also have to add another “P” to this enlightened oil sands policy approach. That is Posterity. What is the legacy we are leaving future generations from the development of the oil sands? That is just as important as satisfying the triple-bottom-line objectives of today. To my mind, posterity starts with a real commitment to reclamation restoration and remediation now, not sometime in the future.

The oil sands are a wonderful opportunity for Alberta to be a model for the world. We are starting to learn how to develop these natural resources in a comprehensive, integrated way based on shared value and shared values. There are some encouraging signs that this is possible but it requires a new kind of leadership.