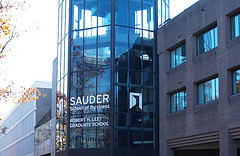 The measures address the conclusions of a university fact-finding team on reports of derogatory chants during the September 2013 Commerce Undergraduate Society FROSH events. The chants were based on the Walt DisneyPocahontas animated film.

“The report we are releasing today shows us there is very little awareness of Indigenous peoples and their concerns among the students we interviewed,” said Vice President, Students Louise Cowin. “Clearly, UBC has a role to play in educating students to become more culturally competent.”

“The Sauder School is deeply committed to building a positive culture of respect and responsibility,” said Helsley. “We need to fully engage our students on the themes of Indigenous culture, social justice and ethics. This is integral to corporate social responsibility in the 21st century.”

Students who were involved in the CUS FROSH ‘Pocahontas’ chants have already held discussions with faculty and students of the UBC First Nations Studies Program. Other workshops are planned for the broader Sauder community.

“The Truth and Reconciliation Commission is asking universities to integrate awareness of Aboriginal issues in professional education,” said Linc Kesler, senior advisor to UBC President Stephen Toope on Aboriginal affairs. “This is a meaningful and significant response on the part of UBC.”