Kimberlite intercepted to below 740 meters from surface

Toronto and New York, June 30, 2014 – Mountain Province Diamonds Inc. (“Mountain Province”, the “Company”) (TSX: MPV, NYSE MKT: MDM) is pleased to announce the results of the 2014 Tuzo Deep drill program, which confirms the continuation of kimberlite to a depth of more than 740 meters below surface.

Mountain Province President and CEO, Patrick Evans, commented: “We are pleased that the 2014 Tuzo Deep drill program has confirmed the continuation of the kimberlite to a depth of more than 740 meters below surface. Based on the current geological model, it appears that the Tuzo kimberlite plunges further to depth to the northeast below 740 meters.”

Mr. Evans added: “Challenging ground conditions resulted in one hole (MPV14-408C) having to be wedged twice (MPV14-409C and 410C) and eventually abandoned in kimberlite due to unstable ice conditions after reaching a depth of approx. 570 meters below surface”.

Table 1 below provides details the results of the 2014 Tuzo Deep drill program. 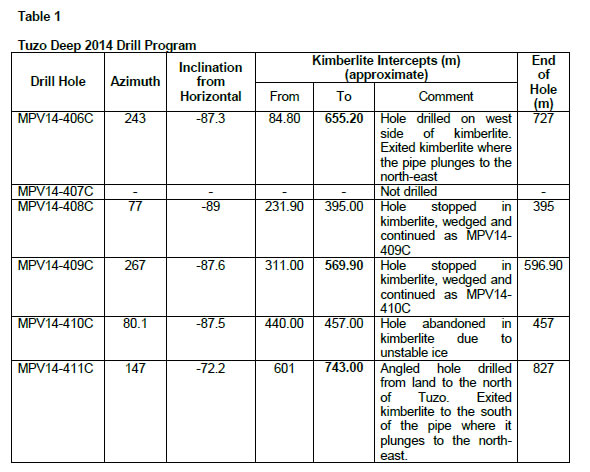 Mountain Province Diamonds is a 49% participant with De Beers Canada in the Gahcho Kué JV located at Kennady Lake in Canada’s Northwest Territories. The Gahcho Kué Project consists of a cluster of four diamondiferous kimberlites, three of which have a probable mineral reserve of 35.4 million tonnes grading 1.57 carats per tonne for total diamond content of 55.5 million carats.

Gahcho Kué is the world’s largest and richest new diamond development project. A 2014 NI 43-101 feasibility study report filed by Mountain Province (available on SEDAR) indicates that the Gahcho Kué project has an IRR of 32.6%.

Overall project development is more than 25 percent complete and scheduled for first production in H2 2016.

This news release has been prepared under the supervision of Carl G. Verley, P.Geo., who serves as the qualified person under National Instrument 43-101.

All reserve and resource estimates reported by the Corporation were calculated in accordance with the Canadian National Instrument 43-101 and the Canadian Institute of Mining and Metallurgy Classification system. These standards differ significantly from the requirements of the U.S. Securities and Exchange Commission. Mineral resources which are not mineral reserves do not have demonstrated economic viability.

This news release may contain forward-looking statements, within the meaning of the “safe-harbor” provision of the Private Securities Litigation Reform Act of 1995, regarding the Company’s business or financial condition. Actual results could differ materially from those described in this news release as a result of numerous factors, some of which are outside the control of the Company.