Fort Frances, ON ― New Gold Inc. (“New Gold”), as represented by the President and Chief Executive Officer Robert Gallagher, and, the Métis Nation of Ontario (“MNO”), as represented by MNO President Gary Lipinski and local Métis leadership, are pleased to announce that they have finalized a Participation Agreement (the “Agreement”) with respect to the development and operation of the proposed Rainy River gold mining project in northwestern Ontario. A formal signing ceremony will be held today at the Métis community hall in Fort Frances.

The Agreement includes provisions on how the local Métis community will benefit from the development of the Rainy River project and throughout the life of the mine, including employment and business opportunities, training and education initiatives and financial participation in the project. The Agreement also establishes a Métis scholarship and bursary program at Lakehead University and Confederation College, which will enhance the MNO’s existing educational supports at both schools. The Agreement incorporates processes that reflect the shared commitment of New Gold and MNO in protecting the environment and wildlife, and building a long term, mutually beneficial relationship. 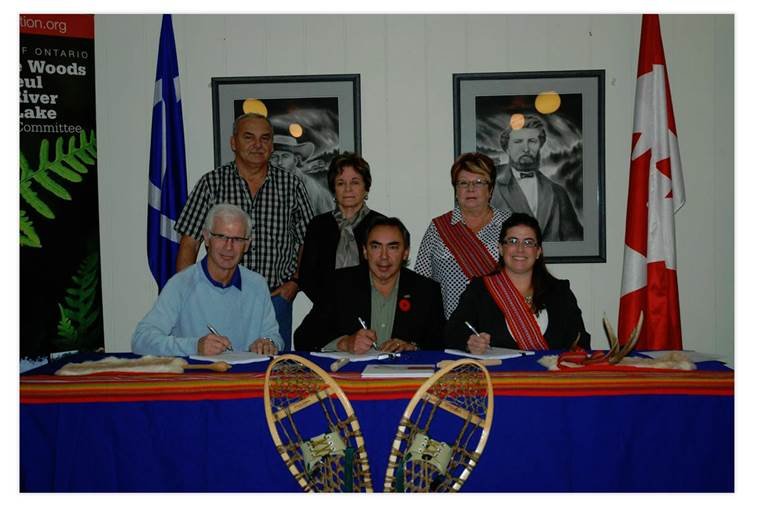 Robert Gallagher stated, “Developing mutually beneficial and cooperative relationships is key to the success of the Rainy River project. We are proud to enter into this Agreement with the MNO and look forward to working together in partnership.”

MNO President, Gary Lipinski, stated, “The MNO is proud of the positive relationship that has been built with New Gold that has led to this Agreement. We believe the Rainy River project will bring much needed economic opportunity to the region as a whole, while also respecting the Métis community’s rights and interests. We see this as a ‘win-win’ for everyone.”

Theresa Stenlund, the MNO Regional Councillor for the Treaty #3 territory, emphasized, “This Agreement could not have been achieved without the hard work and support of the Métis community and its elected leadership. I want to acknowledge their perseverance in achieving this Agreement―the ‘first-of-its-kind’ for the Métis community in this area. We look forward to continuing to work with New Gold for the benefit of our citizens and our young people.”

About the Rainy River Project

The Rainy River project is an advanced-stage gold project situated in Richardson Township, approximately 65 kilometres northwest of Fort Frances in Northwestern Ontario. New Gold completed the feasibility study during the first quarter of 2014. The company is currently focused on engineering, permitting and exploration, targeting production in late 2016. The Rainy River project is being reviewed through a coordinated Federal Environmental Assessment (EA) – Provincial Individual EA process. The draft EA report was reviewed by local First Nations and Métis groups, Federal and Provincial regulatory agencies and other stakeholders. All comments received were addressed in the final EA report which was submitted to government for review.

New Gold is an intermediate gold mining company. The company has a portfolio of four producing assets and three significant development projects. The New Afton Mine in Canada, the Cerro San Pedro Mine in Mexico, the Mesquite Mine in the United States and the Peak Mines in Australia provide the company with its current production base. In addition, New Gold owns 100% of the Blackwater and Rainy River projects, both in Canada, as well as 30% of the El Morro project located in Chile. New Gold’s objective is to continue to establish itself as a leading intermediate gold producer, focused on the environment and sustainability. For further information on the company, please visit www.newgold.com.

The MNO represents Métis citizens and Métis communities throughout Ontario. For more information about the MNO and Ontario Métis visit www.metisnation.org.