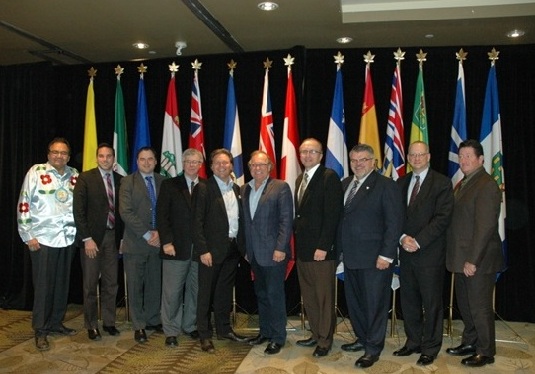 Energy for All was the theme of the Forum co-hosted by Alberta Deputy Premier and Minister of Enterprise and Advanced Education, Thomas Lukaszuk and Saskatchewan Minister of Government Relations and Minister Responsible for First Nations, Métis and Northern Affairs, Jim Reiter.

The results of the three priority projects were presented to the Ministers during the three-day gathering. These projects included: an overview of the complexities of the housing sector in northern regions; research on benefits for local communities; and an analysis of the demand for information and communications technology including the exploration of a Canadian standard for broadband.

“Alberta is dedicated to helping deliver a Canadian Energy Strategy with our provincial and territorial partners and this gathering has given us an important opportunity to provide perspectives on the future of energy development in the north,” said Minister Lukaszuk. “As a co-host of the Forum, I am very pleased with the commitment and passion of my colleagues and this forum is a strong catalyst for how we can all work together to build on our strengths and enhance the quality of life in northern communities.” Provincial and Territorial Ministers expressed interest in exploring potential east-west hydroelectric power grids in the prairies and elsewhere in the north.

One of the goals of the NDMF is raising awareness of northern opportunities and challenges, while highlighting the vital impacts that Canada’s northern regions have across our country. In recognition of the important role that energy plays in Canada’s north, the forum featured tours of the oilsands in the Wood Buffalo Region, the McArthur River Uranium Mine in northern Saskatchewan, and of the many substantial community engagement initiatives occurring in both jurisdictions.

“This conference represented an excellent opportunity for Alberta and Saskatchewan to showcase to our colleagues from across Canada our strong record of ensuring local benefits from major development of our world class resources,” said Minister Reiter.

The seven ministers in attendance, including Federal Minister Bernard Valcourt, agreed to build upon these discussions at the next Forum in Whitehorse, Yukon, in 2014. Next year`s Forum will feature three priority projects: managing change, next-generation economies and phase two of the benefit agreements discussion. The Forum provides federal, provincial and territorial ministers representing Canada’s North an opportunity to advance common interests. For more information on the NDMF visit: www.focusnorth.ca.