The Métis Nation Signs Historic Accord with Canada

The Métis Nation Signs Historic Accord With Canada

(OTTAWA, April 14, 2017)  This morning, Métis Nation of Ontario (MNO) President Margaret Froh attended the inaugural meeting of the Crown – Métis Nation Summit — a permanent bilateral process between Métis Nation leaders, Prime Minister Justin Trudeau and members of his cabinet. During the meeting, President Froh and the leaders of Métis Nation governments signed the Canada-Métis Nation Accord. 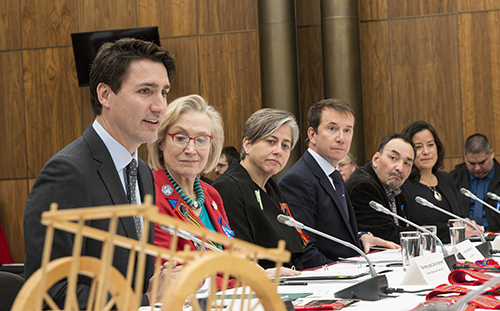 “I was honoured, on behalf of the Métis Nation of Ontario, to participate today in the first ever Crown-Metis Nation Summit and sign the Canada-Métis Nation Accord on behalf of Ontario Métis,” stated President Froh.  “This Accord sets up a permanent bilateral process that marks the beginning of a new relationship between the Crown and the Métis Nation based on recognition, rights and respect.  We look forward, under the Prime Minister’s leadership, for the doors of the federal government to finally open so we can begin to move forward in the spirit of cooperation and partnership.  We will work with the federal government to realize our shared vision of a renewed relationship with the Métis Peoples of Canada, for the benefit of all Canadians.”

“This kind of accountability and access will significantly advance reconciliation between Canada and the Métis Nation,” predicted President Froh. “The MNO will use these new mechanisms and our exploratory discussions process with the federal government to strengthen our role in improving the lives of Métis people in Ontario.  We will continue to work to support Métis community health and well-being; creating opportunity for our Métis children and youth to be the best they can be; protecting and promoting the Métis Way of Life and the environment; advancing the self-sufficiency and sustainability of our nation; and stimulating economic development for our citizens.  At the heart of everything that we do are our MNO citizens, families and communities,” said President Froh.

The Ministers who participated in the Crown-Métis Nation Summit were each selected based on the roles their Ministries play in advancing the immediate priorities of reconciliation through a nation-to-nation, government-to-government relationship with the Métis Nation.

Canada was represented by: