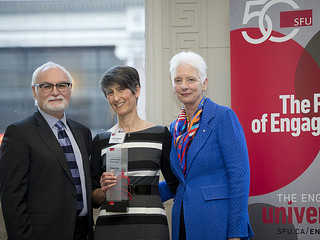 Vancity is this year’s winner of the Simon Fraser University Nancy McKinstry Award for Leadership in Diversity.

The award from SFU’s Beedie School of Business recognizes organizations that exemplify the values of diversity in the workplace.

Vancity, Canada’s largest community credit union, is honoured for its commitment to diversity, in particular its extensive community efforts, and its well-rounded approach to addressing the needs of different identity groups.

The award was presented to Vancity’s Ellen Pekeles, senior vice president of operations, at the Segal Graduate School at SFU’s Vancouver campus.

“The selection committee faced a hard task in choosing a winner from so many outstanding candidates, but Vancity’s focus on diversity and mandate of inclusion is exemplary, and has ultimately benefited not only the organization, but also society as a whole,” said Daniel Shapiro, dean of the Beedie School of Business.

For the first time this year, an award was also presented to an organization that has set itself apart with its own unique diversity program.

The $2,500 award is given to a Beedie School of Business graduate student who has been a leader in promoting opportunities for women in business.

The Awards for Leadership in Diversity were established in 2009 to honour McKinstry for her contributions to SFU as chair of its board of governors.

Simon Fraser University is Canada’s top-ranked comprehensive university and one of the top 50 universities in the world under 50 years old. With campuses in Vancouver, Burnaby and Surrey, B.C., SFU engages actively with the community in its research and teaching, delivers almost 150 programs to more than 30,000 students, and has more than 120,000 alumni in 130 countries.